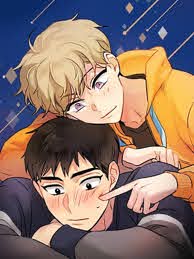 Jisuh is quiet, unassuming… observant. He’s suited to working behind the camera. But for reasons he’s not exactly quick to disclose, he’s run into some debt. Heejae, an actor he’s worked with before, proposes he work with him exclusively on a private project of his…shooting himself and his partner having sex. Jisuh thought he was hired for his camera skills, but Heejae seems to know an awful lot about him and he can’t help but wonder why he really hired him.

Rakuda Tsukai To Ouji No Yoru